It is time for #BLBestOf6. We had recently conducted a few polls asking fans to choose the best amongst the best from the first half of 2020. Now, we have the results. Until now we have revealed the winners of Best TV Actor, Best TV Actress, Best TV show and many others. Today we will be talking about the Best TV Jodi whose crackling chemistry has won the hearts of the audience. We had some excellent performances in the last six months. For this particular category, the nomination list included six of the best performers on television – Shaheer Sheikh-Rhea Sharma for Yeh Rishtey Hain Pyaar Ke, Mohsin Khan-Shivangi Joshi for Yeh Rishta Kya Kehlata Hai, Parth Samthaan-Erica Fernandes for Kasautii Zindagii Kay 2, Shabir Ahluwalia-Sriti Jha for Kumkum Bhagya, Dheeraj Dhoopar-Shraddha Arya for Kundali Bhagya, and Vijayendra Kumeria-Nia Sharma for Naagin 4. However, it is Yeh Rishtey Hain Pyaar Ke’s Shaheer Sheikh and Rhea Sharma who have emerged as the winners. Also Read – Yeh Rishtey Hain Pyaar Ke’s Rhea Sharma aka Mishti on emotionally taxing scenes: It is very challenging as well as exciting

Shaheer Sheikh and Rhea Sharma as Abir and Mishti have been loved by the audience. This the second consecutive year when they have been crowned as the Best TV Jodi by the audience. Rhea and Shaheer have impressed the audience with their realistic performances. Hence, they have bagged the honours with a whopping 55% of the votes. Yeh Rishta Kya Kehlata Hai‘s Mohsin Khan and Shivangi Joshi aka Kartik and Naira have got just 1% votes. Parth Samthaan and Erica Fernandes of Kasautii Zindagii Kay 2 have a tie with Mohsin Khan and Shivangi Joshi with 1% of votes. Surprisingly, Kundali Bhagya’s Dheeraj Dhoopar and Shraddha Arya aka Karan and Preeta have not received any vote. Also Read – Yeh Rishtey Hain Pyaar Ke: Shaheer Sheikh is all heart for Ruslaan Mumtaz and Rhea Sharma’s picture 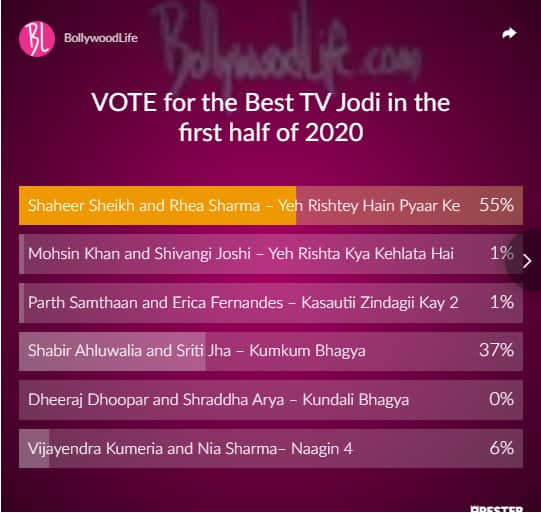 Naagin 4’s Nia Sharma and Vijayendra Kumeria aka Brinda and Dev have been impressive. They have got 6 % of votes which is better than Mohsin Khan-Shivangi Joshi, Parth Samthaan-Erica Fernandes and Dheeraj Dhoopar-Shraddha Arya. Lastly, it was Kumkum Bhagya’s Shabir Ahluwalia and Sriti Jha aka Abhi and Pragya who were a tough competition for Shaheer Sheikh and Rhea Sharma. Shabir Ahluwalia-Sriti Jha have a huge fan following and they have received 37% of votes.