If we take a close look at social media, we will know that Bollywood does not even attract half the attention as TV. BollywoodLife conducted its #BLBestOf6 to find out what people loved in the first half of the year. We asked fans to rate the Best TV Promo of the first six months. As we know, it has not been an easy year for the entertainment industry. We have lost one luminous talent after another. Now, fans have given their verdict. They have adjudged the #MishBir wedding promo of Yeh Rishtey Hain Pyaar Ke as the Best TV Promo of 2020 so far. And with a good margin! Also Read – #BLBestOf6: Yeh Rishtey Hain Pyaar Ke’s Shaheer Sheikh and Rhea Sharma crowned as the Best TV Jodi – view poll results 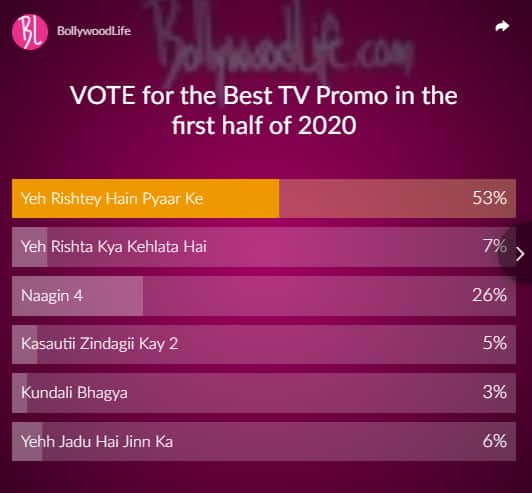 The promo got 53 per cent of the votes. As we know, Abir (Shaheer Sheikh) and Mishti (Rhea Sharma) had a dream wedding on the show. They had a bus all decked up for them. Abir made his entry on a bus in the romantic family drama. The show is hugely popular with young people all over India and abroad. Rhea Sharma as Mishti looked exceptionally beautiful in the red lehenga. Shaheer Sheikh was also dapper as a groom in his regal sherwani. Here is a look at the promo… Also Read – Yeh Rishtey Hain Pyaar Ke: Shaheer Sheikh is all heart for Ruslaan Mumtaz and Rhea Sharma’s picture

Naagin 4’s promo took the second spot with 26 per cent votes. It was the promo that heralded the entry of Rashami Desai on the show. She played the role of Shalaka, a vamp. The TV diva was fresh off her outing on Bigg Boss 13 where she impressed with her resilience and dignified conduct. Fans cheered as Rashami Desai made her stunning entry on the show. The third spot was taken by Yeh Rishta Kya Kehlata Hai’s third marriage promo of Kartik (Mohsin Khan) and Naira (Shivangi Joshi).