Due to the lockdown phase, we saw many old and iconic show like Ramayan, Mahabharat, Shaktimaan, Hum Paanch, Shri Krishna and others dominate the TRP list and garner great viewership. While we enjoyed the nostalgic era, we can’t deny the fact that current TV shows have become an integral part of our life and we are super-happy to see fresh episodes of them. We recently conducted a poll to see which one of the current television serials has impressed you the most in the first half of 2020. The results are in and it’s clear as day that the comedy show, Taarak Mehta Ka Ooltah Chashmah, which has been entertaining us for over a decade, continues to rule viewer’s hearts, emerging the winner with a massive 43% of the votes. Also Read – Taarak Mehta Ka Ooltah Chashmah’s Munmun Dutta aka Babita is all praise for Kangana Ranaut’s ‘brave’ interview 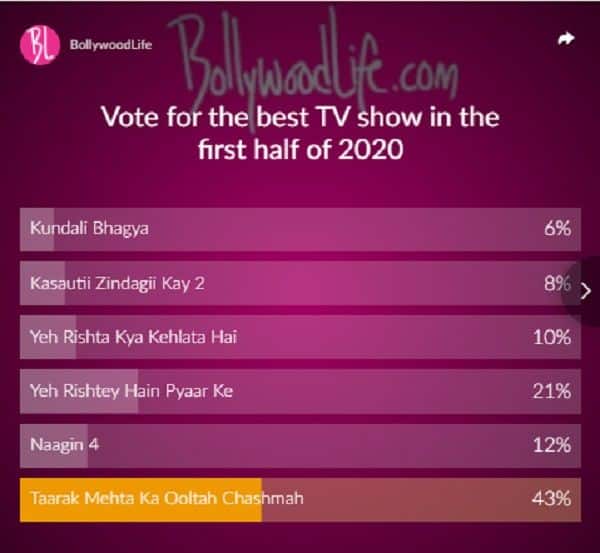 TMKOC, which stars an ensemble cast of Dilip Joshi, Raj Anadkat, Amit Bhatt, Shailesh Lodha, Neha Mehta, Tanuj Mahashabde, Munmum Dutta, Mandar Chandwadkar, Sonalika Joshi and others is known for showcasing daily middle-class life in a relevant yet quirky manner. Each and every character of the Gokuldham family has formed a special place in our hearts. Taarak Mehta Ka Ooltah Chashmah is all set to complete 3000 episodes and will be the second show to achieve the feat after Yeh Rishta Kya Kehlata Hai (also nominated). The makers recently resumed shooting the show, and we will soon see fresh episodes from July 22 onward, which will be telecast from Monday to Friday at 8: 30 pm. Also Read – Taarak Mehta Ka Ooltah Chashmah’s fresh episodes to begin from THIS date

Do you think the singing reality show has turned into a daily soap due to unnecessary drama? Vote now