Six months of 2020 have passed. It has been a truly difficult phase in our lives. However, our favourite television actors did not stop entertaining us. We’ve seen some brilliant performances on television, with several handsome hunks of TV impressing us with their onscreen talent. So, to find out who was the best of the best, we had conducted our annual #BLBestof6 poll and now, finally, the results are out. Today, we will be declaring the results for the Best TV Actor in the first half of 2020. For this particular category, the nomination list included six of the best performers on television – Shaheer Sheikh for Yeh Rishtey Hain Pyaar Ke, Mohsin Khan for Yeh Rishta Kya Kehlata Hai, Parth Samthaan for Kasautii Zindagii Kay 2, Shivin Narang for Beyhadh 2, Vijayendra Kumeria for Naagin 4 and Vikram Singh Chauhan for Yehh Jadu Hai Jinn Ka. Also Read – Shaheer Sheikh on resuming shoot for Yeh Rishtey Hain Pyaar Ke: The production team is making steam-machines and kadha available to everyone on-set

The audience has decided the winner and its none other than Shaheer Sheikh. Shaheer Sheikh has won hearts with his performance as Abir Rajvansh in Yeh Rishtey Hain Pyaar Ke. This is the second year straight where Shaheer has topped the list. Last year, he had tied with Karan V Grover. This year though, the audience was very clear about their choice for Shaheer Sheikh as Abir. Shaheer Sheikh received a whopping 48% of votes this year. He has been terrific as Abir in Yeh Rishtey Hai Pyaar Ke and his chemistry with Rhea Sharma is amazing. Shaheer Sheikh‘s Yeh Rishtey Hain Pyaar Ke is the spin-off show of Yeh Rishta Kya Kehlata Hai, but the actor has beaten even Mohsin Khan in the polls. Yeh Rishta Kya Kehlata Hai’s Mohsin Khan received a disappointing 2 % of votes. He has been playing Kartik Goenka in Yeh Rishta Kya Kehlata Hai for 4 years and has a huge fan following but it seems Shaheer has all the attention this year. Kasautii Zindagii Kay 2’s Parth Samthaan also received just 2% of votes. It seems the new Anurag Basu couldn’t make a place in the hearts of the audience. Also Read – Shaheer Sheikh, Shivangi Joshi, Hina Khan — here are the TV Instagrammers of the week 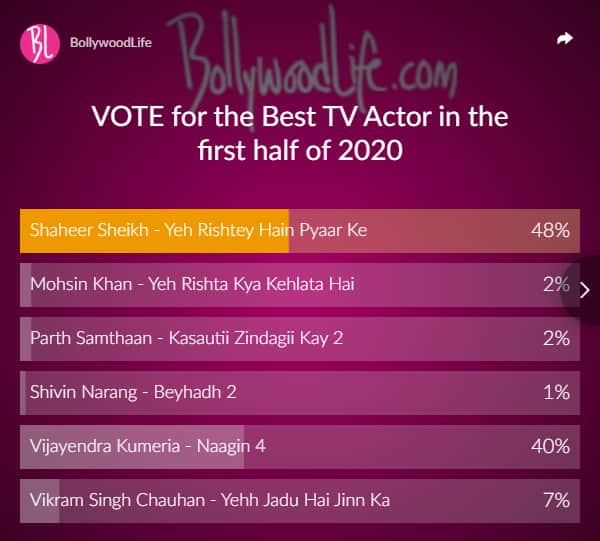 Shivin Narang received the least number of votes for his performance in Beyhadh 2 – just 1% voted for him. Yehh Jadu Hai Jinn Ka actor Vikram Singh Chauhan got 7 % of the votes, which is quite higher than Mohsin Khan, Parth Samthaan and Shivin Narang. He definitely has been impressive as Aman in the show. Lastly, it’s Naagin 4’s Vijayendra Kumeria who gave a tough fight to Shaheer Sheikh. He received 40% votes, just 8% shy of Shaheer. Even though Naagin 4 has not performed to expectations, Vijayendra Kumeria’s act has by and large been appreciated.

So, are you guys happy to see Shaheer Sheikh aka Abir Rajvansh from Yeh Rishtey Hain Pyaar Ke winning? Do wait for more of #BLBestof6 results.