We’re back to announce another round of results for our half-yearly poll event known as #BLBestOf6, which takes place after the first six months of the year, with an aim to choose the artistes and films that excelled over others. For 2020, the nominees for Best South Actress included Keerthy Suresh for Bhonsle, Rashmika Mandanna in Bheeshma, Samantha Akkineni in Jaanu, Pooja Hegde in Ala Vaikunthapurramuloo, Jyothika in Ponmagal Vandhal and Mamta Mohandas in Forensic. Well…the results are in and it’s time to declare the winner. Also Read – Throwback Thursday: When Nayanthara refused to share screen space with Shah Rukh Khan

As per your votes, Jaanu’s Samantha Akkineni has won the race by a fair margin. She has got 45% of the votes, 14% more than her closest competitor, Mamta Mohandas for Forensic. The other nominees though are far removed from both of them with Rashmika Mandanna coming in third with 14% of the votes for Bheeshma, followed by Keerthy Suresh and Pooja Hegde with 4% votes each for Penguin and Ala Vaikunthapurramuloo. Jyothika, nominated for Ponmagal Vandhal trails at fag end with merely 2% of the votes. Also Read – From Chiranjeevi’s war of words with Rajasekhar to Rajinikanth receiving death threats — 12 controversies that shook the South film industry 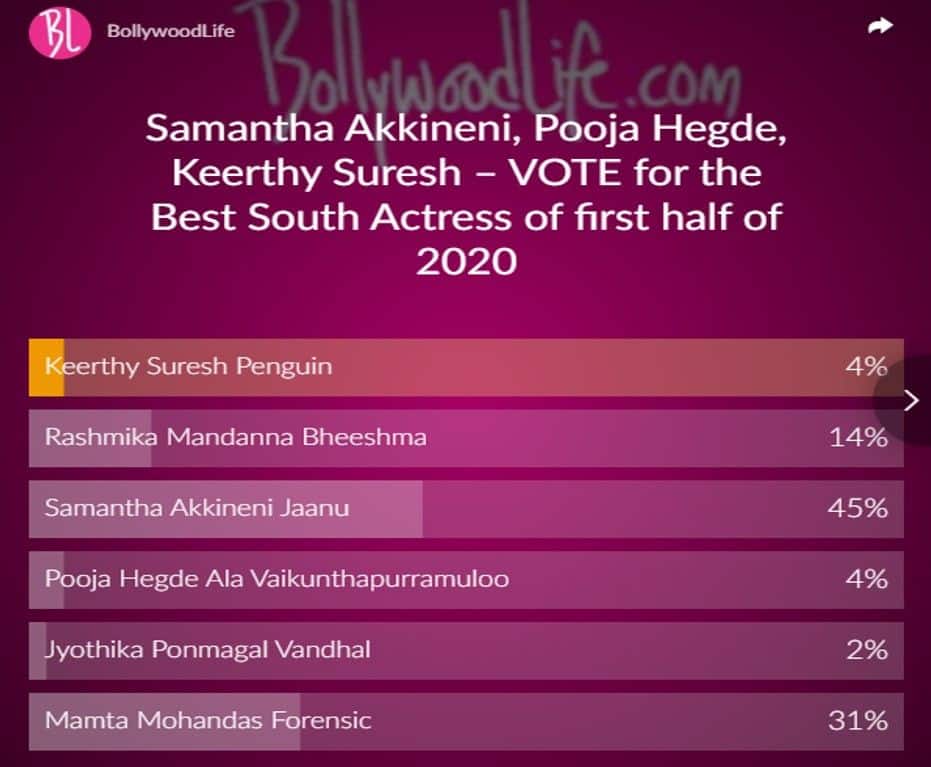 In other words, this was a 2-horse race for some time between Samantha Akkineni and Mamta Mohandas for Jaanu and Forensic, till the former ended up pulling ahead by a decent margin. This is also a testament of how popular Sam is among the audience both down South and elsewhere as her victory can take nothing away from the performances of all the other actress, all of whom brilliantly portrayed their character whether they were serious or hardcore masala roles. One also needs to factor in that Jaanu was a remake of an already popular Tamil film, ’96, which already has a loyal fan-base across demographics, who were mighty impressed by how Samantha reprised Trisha Krishnan’s role sans aping any of her nuances, rendering a new dimension to her character.

So, are you contented with Samantha Akkineni being declared the Best South Actress in the first half of 2020? Did you vote for her or one of the other five nominees or would you have rather seen someone else on the list? Tweet and let us know @bollywood_life .