#BLBestOf6 is here and now it’s time for the results. We had recently conducted our polls and the audience have now given their verdict. After releasing the results of Best TV Actor, we are all set to announce the winner of our Best TV Actress category. The leading ladies of the television industry gave some brilliant performances over the past six months. For this particular category, the nominations included six of the current best performers on television – Erica Fernandes for Kasautii Zindagii Kay 2, Dipika Kakar Ibrahim for Kahaan Hum Kahaan Tum, Shivangi Joshi for Yeh Rishta Kya Kehlata Hai, Rhea Sharma for Yeh Rishtey Hain Pyaar Ke, Shraddha Arya for Kundali Bhagya and Nia Sharma for Naagin 4. And surprise, surprise…the actress who received the most number of votes is the underdog of the year, Rhea Sharma. Rhea Sharma has been excellent as Mishti in Yeh Rishtey Hain Pyaar Ke. When the show was launched, many could not accept Rhea Sharma as a leading lady of a show. But she has proved everyone wrong with her skilled performance. Also Read – Yeh Rishta Kya Kehlata Hai, Parth Samthaan, Yeh Rishtey Hain Pyaar Ke — here are the TV newsmakers of the week

Rhea has impressed us all as Mishti, and her crackling chemistry with Shaheer Sheikh has become the talk of the town now. In recent episodes, we have seen both of them giving brilliant performances. She received 29 % of the votes. Last year, she was beaten by Dipika Kakar Ibrahim, but the tables have now turned. Dipika Kakar Ibrahim received 16 % of the votes for her performance in Kahaan Hum Kahaan Tum. The show has gone off air but fans have still not forgotten Sonakshi Rastogi. Yeh Rishta Kya Kehlata Hai actress Shivangi Joshi has a huge fan-following and her character, Naira, is extremely popular. However, she received just 19% of the votes. Nia Sharma got 8% votes for her role as Brinda in Naagin 4 while Shraddha Arya from Kundali Bhagya secured just 7 %. Also Read – Yeh Rishtey Hain Pyaar Ke: Fans praise Shaheer Sheikh and Rhea Sharma’s ‘nerve-wracking’ performance as Abir and Mishti 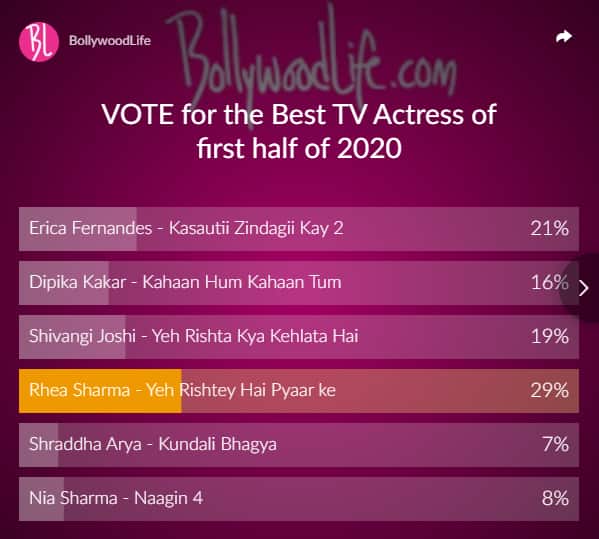 Only Erica Fernandes from Kasautii Zindagii Kay 2 gave a tough fight to Rhea Sharma. She received 21 % of the votes for her role as Prerna Sharma. She has done a great job and her huge fan-base can never be counted out. However, Rhea Sharma aka Mishti from Yeh Rishtey Hain Pyaar Ke took surpassed everyone and won the Best TV Actress in the first half of 2020.