Amidst all the devastating news we have got in 2020, the only bright ones have been of the weddings and babies being born. Rana Daggubati has given us the surprise of the year so far by announcing his wedding with Miheeka Bajaj. In May, he said on social media that Miheeka Bajaj had accepted his marriage proposal. She is an interior designer and the founder of the Dew Drops Design Studio. Rana Daggubati and Miheeka Bajaj are getting married on August 8, 2020. With less than a month away for the marriage, Miheeka Bajaj has started her preparations. She has shared pics of some lovely juttis that she has received from a well-known brand. They had been specially packed for the stunning bride. Also Read – Rana Daggubati on his decision to marry Miheeka Bajaj: It is chill, easy 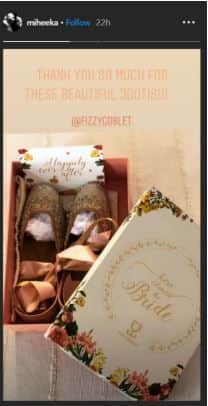 Miheeka Bajaj and Rana Daggubati knew one another for ten years. She is the daughter of a leading Hyderabad business family that deals in jewellery. Her mother is also into interiors. Miheeka Bajaj has studied interior design in the UK. She has worked on the wedding decor of some high profile marriages. Rana Daggubati told Lakshmi Manchu, “I and the whole Daggubati family knows Miheeka Bajaj for more than a decade now as she is the classmate of Venkatesh Daggubati’ daughter Ashritha. I have met Miheeka Bajaj many times, but neither I felt such type of feelings. But after a long time when I met her, I felt the vibe and felt that she is the right person for me. First I informed to my parents. After they agreed, I called Miheeka Bajaj and proposed her. She was shocked and was extremely happy.” Also Read – #HappyFathersDay: Allu Arjun, Mahesh Babu, Ram Charan and other south celebs share special memories with their dads

He also revealed details about the proposal. Rana Daggubati said, “She knew where I’m getting at when I called her. And then she met me in person. I said a bunch of things together. When I met her, that’s the time I felt I am ready to do this.” The Roka ceremony happened at Ramanaidu Studios.