Sushmita Sen’s brother Rajeev Sen has been in the news recently for all bad reasons. He and his wife, Charu Asopa have apparently separated and are facing some issues in their marriage. It was recently reported that amidst all these separation rumours, Rajeev Sen has also been approached for Salman Khan’s Bigg Boss 14. As per a report in ETimes, Rajeev Sen has been approached by the makers for the next season of Bigg Boss. A source close to the development of the show said, “Rajeev Sen has been approached for the show and he wishes to appear alone. Nothing is finalised and we are discussing the fees. Everything is in the initial stage right now.” It was also said that Rajeev and Charu were offered Bigg Boss 13 as well. “He was approached last year as well. His wife Charu also wanted to appear. But her brother was getting married at the time of the show. And Rajeev was apprehensive to appear alone, hence things didn’t work out,” the source added. Also Read – Bigg Boss 14: Salman Khan to begin shooting from September; Vivian D’Sena, Nia Sharma to be a part of the show?

Now, Rajeev Sen has cleared the air. He took to his Instagram stories and revealed that he is not entering the controversial reality show. Rajeev wrote, “Not in Bigg Boss 14 Loud & Clear Shukriya.” Check out his story here: Also Read – Bigg Boss 14: Amidst marriage trouble with Charu Asopa, Rajeev Sen approached for the reality TV show? 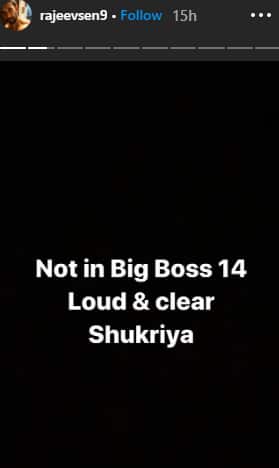 Rajeev Sen and Charu Asopa had married in June last year but things seemed to have gone wrong within a year. Charu had dropped Rajeev surname and later we saw them deleting all their pictures together on social media. Rajeev also went on to say that he feels someone is brainwashing his wife. While Charu denied and said that she is mature enough to take her own decisions. She also said that if Rajeev thinks so that she is innocent and gets influenced by others then he shouldn’t have left her to live alone. However, it seems the two have buried their differences as Rajeev Sen shared a screenshot of their video chat yesterday. Yes, Rajeev Sen wrote, “Hi Charu, Hi Rajeev. To all our fans who love us unconditionally.” They both looked happy while they were chatting together.