Rajeev Sen and Charu Asopa had sparked break up rumours after Charu had dropped Rajeev’s surname and the Rajeev left for Delhi. Post that we saw them deleting their pictures together from social media. Later Rajeev in an interview said that he is in a happy zone. Rajeev Sen said he feels someone close to his wife has been brainwashing her. Charu Asopa also reacted to his comment. In an interview with the Times Of India, she said, “No one is brainwashing me. I am mature enough to make my own decisions — something that I have always done. Main hamesha se apne decisions khud leti aayi hoon. Maybe, he was brainwashed into deleting our pictures from his social media handles.” Charu Asopa also said that Rajeev shouldn’t have left her alone in such difficult times if he thinks I am innocent and get easily influenced. Also Read – Bigg Boss 14: Amidst marriage trouble with Charu Asopa, Rajeev Sen approached for the reality TV show?

She said, “If he thinks that I am innocent and gullible, and could be influenced by those around me, why did he leave me to live on my own during these tough times? This is the time for families to come together and be by each other’s side. But, Rajeev moved out and flew to Delhi a few days before our first wedding anniversary. It’s been two months now. Why would he do that? Shaq ka koi ilaaj nahi hai (There is no cure for doubt). What led to this and the issues in our relationship… there is a lot that I can talk about, but I don’t want my personal life to become a public spectacle. I don’t want it to become a part of anyone’s gossip session.” However, it seems the two have buried their differences as Rajeev Sen shared a screenshot of their video chat today. Yes, Rajeev Sen wrote, “Hi Charu, Hi Rajeev. To all our fans who love us unconditionally.” Check out the screenshot here: Also Read – ‘Why did he leave me to live on my own,’ Charu Asopa REACTS to Rajeev Sen’s comment of her being brainwashed 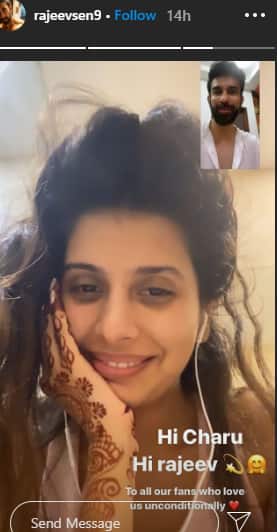 Also Read – Rajeev Sen opens up on rumours of separating from wife Charu Asopa; says, ‘Someone is brainwashing her’

Well, the screenshot gives some positive vibes and fans are happy that they both have reconciled.