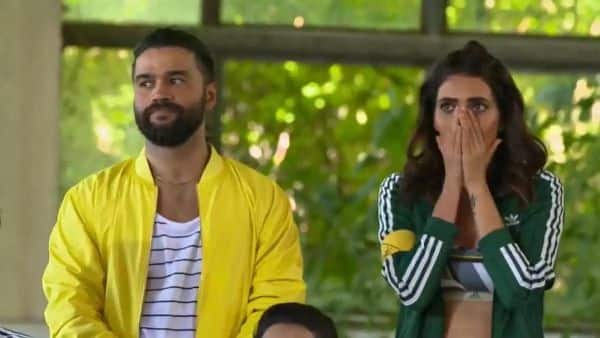 Tonight’s episode starts with Rohit Shetty promising that we will witness a tough competition between Karan Patel, Dharmesh Yelande, Karishma Tanna and Syal. Blockbuster director asks grand-finalists about their KKK 10 journey and we them speaking about it in an emotional manner. And Rohit Shetty introduces the stunt, which looks quite tough and dangerous. Karan goes for it and we see him doing it like a boss and completing it. Now Karishma gets ready for her stunt and even finishes it quite comfortably. While Karan took 4 min 17 seconds, Karishma won the stunt as she did the stunt in 3 minutes 50 seconds. Also Read – Khatron Ke Khiladi 10: Fans trend #WeStandByTejasswi slamming contestants for being unfair towards Tejasswi Prakash

Now Dharmesh and Balraj will compete in the next stunt. And the choreographer goes for his stunt, which looks quite thrilling. While D tried his best, he was not able to finish it. Now, Balraj gets ready and he seems quite nervous but the comedian starts quite well and completes the stunt. Now Balraj and Karishma will compete for the third stunt. And Balraj gets ready for it and just to keep us hooked, the show ends. Which means, in the next week we will see, the first finalist between Balraj and Karishma followed by some twists to create the buzz for the finale. So, are you excited for the finale week? Tweet and let us know @bollywood_life. Also Read – Khatron Ke Khiladi 10, 12 July 2020 written update: Tejasswi Prakash’s health deteriorates while contestants perform stunts with their friends