Yeh Rishta Kya Kehlata Hai star Karan Mehra is in the news for all the wrong reasons. His wife Nisha Rawal recently filed as domestic violence case against him. He is currently out on bail after being taken into custody. Nisha and Karan, both are leveling serious allegations against each other. While Karan Mehra stated that Nisha suffers from bipolar disorder, Nisha Rawal accused Karan Mehra of having an extra marital affair. Amidst this, pictures of Karan Mehra and his co-star Himanshi Parashar have gone viral.

Karan Mehra is currently a part of a Punjabi show called Mawaan Thandiyan Chawan. He has Himanshi Parashar as the lead actress opposite him. On one of the video shared by Himanshi, Karan had left a comment and that has called for everyone’s attention. Sharing the video that seems to be a scene from the show, Himanshi wrote, “Karan says that i’m a down to earth person @realkaranmehra i knw it’s lame. #bts @maavanthandianchaavan @zeepunjabi_off.” Replying to this, Karan wrote, “I had said “Itna bhi nahi girna chahiye ki aap zameen pe aa jao” Cute moment and fun shooting with you.” In response, Himanshi wrote, ” apke liye hum kahi bhi gir jaynge karan ji”. Fans are dropping comments like “Chii” on this post. Take a look: 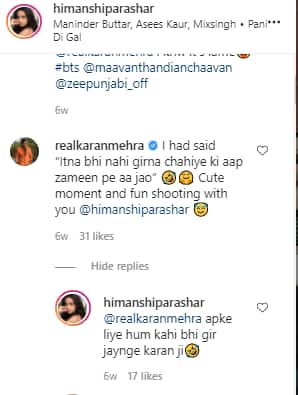 Meanwhile, Karan Mehra has also stated that he does not feel their son Kavish is safe with Nisha. He was quoted saying to a news agency, “I feel my son is not safe with Nisha anymore. Earlier I happily decided to let Kavish live with Nisha but now I really don’t know. I don’t want my child to get affected. I am really worried about him. It’s heartbreaking to see whatever is happening.” Quite a few celebrities who happen to be good friends with the couple like Gaurav Chopraa, Kashmera Shah, Rohit Verma and others have commented on the controversy.