Filmmaker Karan Johar has been keeping a low profile since he faced backlash from social media users for promoting nepotism after the tragic demise of Sushant Singh Rajput. Post that, we have not seen KJo posting any stuff on the social site, there’s a new buzz that he has made a new account on Insta, which is private. Well, the account name is Karanaffairs and we can see Gauri Khan, Suhana Khan, Ananya Panday, Shweta Bachchan, Maheep Kapoor and other friends following this account. Though it seems, the account has been deactivated by filmmaker. Also Read – Riddhima Kapoor Sahni slams an ‘attention-seeker’ who wrote that Neetu Kapoor, Ranbir and Karan Johar have tested positive for COVID-19 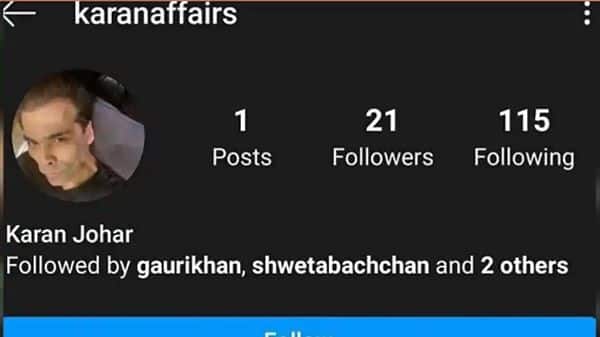 Also Read – #6YearsOfHSKD: Sidharth Shukla fans remind makers that the Balika Vadhu star was also a part of the film as they make him trend on top

On SSR’s demise, Karan Johar expressed his grief on Instagram and wrote, “I blame myself for not being in touch with you for the past year….. I have felt at times like you may have needed people to share your life with…but somehow I never followed up on that feeling…will never make that mistake again…we live in very energetic and noisy but still very isolated times …some of us succumb to these silences and go within…we need to not just make relationships but also constantly nurture them….Sushants unfortunate demise has been a huge wake up call to me …to my level of compassion and to my ability to foster and protect my equations…..I hope this resonates with all of you as well….will miss your infectious smile and your bear hug ….” Also Read – Sara Ali Khan’s twinning moment with mom Amrita Singh and Karan Johar, Ranbir Kapoor celebrating Neetu Kapoor’s birthday went viral this week

Fire breaks on the sets of the show; Sriti Jha, Reyhna Pandit assure everyone is safe