The year 2020 has been disastrous for movies. We did not have any releases in theatres for the better part of the first half of the year due to the coronavirus pandemic. If that was not heart-breaking enough, then over the past four months, we have lost some truly talented artistes one after another. However, we did see some great performances both in films and on OTT platforms. So, we conducted a poll known as #BLBestOf6 to pick the best of the best. Today, we’ll see the results for the Best Actress in Bollywood over the past six months. Kangana Ranaut has come up trumps with a massive 94% of the votes, beating the likes of Taapsee Pannu (Thappad), Deepika Padukone (Chhapaak), Alaya F (Jawaani Jaaneman) and Radhika Madan (Angrezi Medium). Kangana has usually impressed everyone with her superlative performances, and Panga was no different. She got a staggering 94 per cent votes from our readers. Also Read – Karan Patel takes a dig at Kangana Ranaut’s nepotism tirade, asks, ‘Why didn’t she cast Sushant in her film?’ 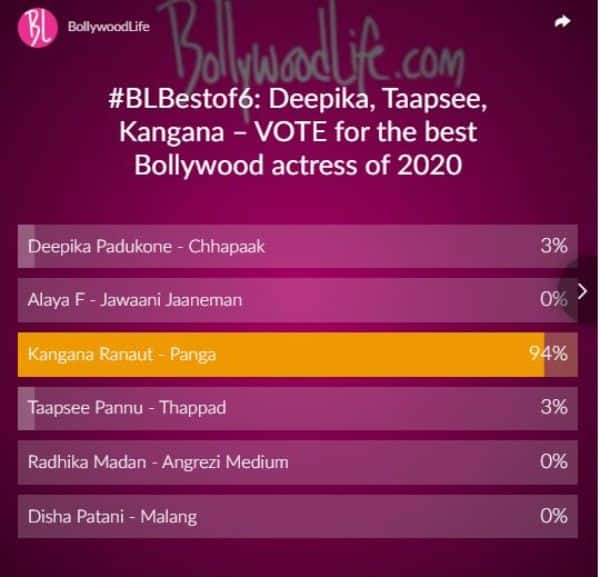 Also Read – Kangana Ranaut hits back at Pooja Bhatt for taking credit for her launch, says, ‘To get talented people for free is a favour many studios do’

Kangana Ranaut played the role of a kabaddi player in the film. She plays the former captain of the Indian Women’s Kabaddi Team, who gives up her career after the birth of her son. Taking up a challenge from her son, she again starts playing and makes it to the national squad. From the moves to the emotions, there was not a single false note in the actress’ performance. The film was a flop, but people raved about Kangana Ranaut’s acting. In fact, all the nominated ladies came out all guns blazing with their histrionics. After her, it was Taapsee Pannu and Deepika Padukone who got 3 per cent votes each. Also Read – From Sushant Singh Rajput’s suicide to Deepika Padukone’s JNU visit – 7 Bollywood events that created a stir in the first half of 2020

Deepika Padukone was also good in Meghana Gulzar’s Chhapaak while Taapsee Pannu aced it as Amrita in Thappad. In fact, Anubhav Sinha’s Thappad has hitherto been the most talked about film of 2020. It is about a woman who is on the road of self-discovery after being slapped by her husband in a fit of rage. Taapsee Pannu was in supreme form in the movie. It is not only the senior actresses though, who are impressing everyone. Newcomers like Radhika Madan and Alaya F were great in their own right in Angrezi Medium and Jawaani Jaaneman. Disha Patani also left people damn impressed with her vibrant act in Malang.

Allu Arjun, Mahesh Babu, Mammootty – VOTE for the Best South Actor of first half of 2020

Alaya F, Hina Khan, Priyaank Sharma — vote for Best Debutant in the first half of 2020