Shabir Ahluwalia and Sriti Jha starrer Kumkum Bhagya is one of the most loved shows and has a huge fan following. However, a shocking had happened yesterday on the sets of the show. The team of Kumkum Bhagya had begun shooting a few days ago and yesterday fire broke out on the sets of Kumkum Bhagya. It was reported that the cast and crew members of the show are safe and there were no injuries as well. Only the property has been damaged a bit but the cause has not yet been revealed. The shooting did resume again today. After few hours of the fire break, Sriti Jha took to social media and assured her fans that she is safe and even other members of the show are safe. She also revealed a ‘special’ person checked up on her. She shared her picture and wrote,”Aai ne meri nazar utari. Main bilkul safe hu! We never speak much mostly I’m at a loss of words for her. But she called me over for this. Kahan rakhu itna saara pyaar!” Also Read – CONFIRMED! Kasautii Zindagii Kay 2’s Pooja Banerjee to replace Naina Singh in Kumkum Bhagya

The special person Sriti Jha is referring to in the post is a woman who makes home-made food with her son under the name ‘Aai’s Kitchen Mumbai’. Reyhna Pandit who plays Aaliya in the show also revealed that everyone was safe on the sets. In an interview with Pinkvilla she said, “Everybody was a little scared but the situation was brought under control. The production people on sets took charge immediately and upar chad gaye in an attempt to extinguish the fire. The studio is well equipped with a fire extinguisher so everybody was on the job till the fire brigade came to take charge in controlling the fire. But thankfully we were well equipped or else the fire would have spread further and become worse by the time the Fire Brigade came.” Also Read – Kundali Bhagya’s Shraddha Arya wanted to pull Dheeraj Dhoopar’s cheeks when she met him on set after 3 months 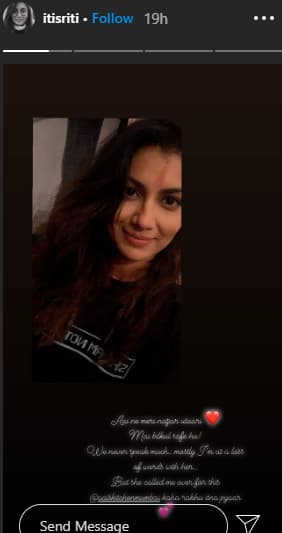 Also Read – Shikha Singh Shah on being replaced in Kumkum Bhagya: I didn’t quit the show and was hoping to get back

Reyhna also shared that the set is not damaged. The property which was affected is where the makeup rooms are. She said, “The shoot had come to a halt for an hour or so. Mostly everyone had packed up but I had to complete a few scenes because it was for Monday’s telecast. Everyone will be shooting tomorrow. Everything was sorted peacefully. Everybody is safe. The work will resume tomorrow.”

I broke down on a couple of occasions, but never in front of the family