The Hindi film industry saw just a few films releasing in the theatres this year and it’s all thanks to the COVID-19 pandemic that spread across the globe. Before a lockdown was announced in March in the country, a handful of films had released in the theatres and a many were eagerly waiting to release their films in theatres, however, the pandemic spread quickly and everything was shut down. Talking about films, we all know what kind of promotions these filmmakers do before they are closing in for a release. Trailers are launched, songs released, events are attended with celebs promoting their films. Which brings us to our half-yearly polls, #BLBestof6 wherein, you vote and make the best win. Today, we will be declaring the results of the Best trailer poll that we conducted a couple of weeks ago. We had, Tanhaji: The Unsung Warrior, Thappad, Chhapaak, Malang, Gulabo Sitabo, and Sooryavanshi competing and you have chosen Rohit Shetty’s cop-actioner’s trailer to be the best among the aforementioned ones. Also Read – Happy birthday, Katrina Kaif: Salman Khan wishes his close friend with a romantic still from Tiger Zinda Hai

Akshay Kumar and Katrina Kaif starrer Sooryavanshi was all set to release when the lockdown was announced. The trailer had been launched already and it received some rave reviews from the junta as well. There were quite a few memes made on the length of the trailer as well. The promotions were in a full-swing but the pandemic situation forced the makers to delay the release. Coming back to the results there was a major competition between Sooryavanshi, Chhapaak and Tanhaji: The Unsung Warrior. Rohit Shetty‘s Sooryavanshi earned about 32 per cent votes. On the second position is Deepika Padukone-Vikrant Massey starrer Chhapaak. Ajay Devgn–Kajol and Saif Ali Khan‘s Tanhaji: The Unsung Warrior got 28 per cent votes. Also Read – Sooryavanshi, ’83, Bhuj: The Pride Of India: 12 Bollywood movies that promise blockbuster entertainment in the second half of 2020

Taapsee Pannu‘s Thappad was hard-hitting and one of the most critically acclaimed films of 2020. However, the audience cast in just 7 per cent votes. Aditya Roy Kapur–Disha Patani–Kunal Kemmu–Anil Kapoor starrer Malang earned 2 per cent votes while Ayushmann Khurrana and Amitabh Bachchan‘s Gulabo Sitabo which was supposed to have a theatrical released earned 1 per cent votes. Also Read – Tiger Shroff recalls having stage fright when Akshay Kumar asked him to show some kicks — watch video

Check out the results below: 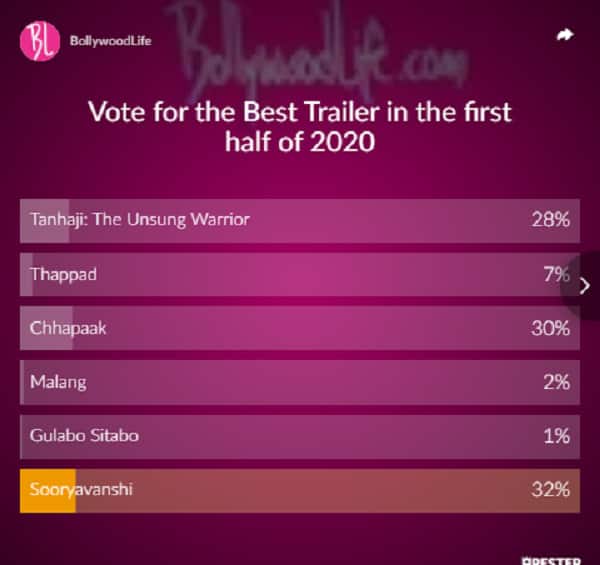 Which of the trailers did you vote for? Let us know by tweeting to us @bollywood_life .