Deepika Padukone and Ranveer Singh make for one of the most handsome couples in the entertainment industry. They share a unique camaraderie that is endearing in which they don’t shy away from pulling each other’s leg, boasting about having the best partner and cheering for one another. All of these are couple goals for many. Deepveer shippers wait for Deepika or Ranveer to post something. And Deepika recently conducted a QnA session on her Instagram handle in which a fan asked her what would she like to tell Ranveer. Also Read – Throwback Thursday: When Nayanthara refused to share screen space with Shah Rukh Khan

Deepika had a hilarious response which will make you say, “just couple things”. “If you could say one thing to Ranveer using this platform right now, what would it be?” a fan asked to which she replied saying, “You’ve snoozed about 35,000 times! Come on! Breakfastt is on the table!” as she tagged Ranveer Singh in the post. Have a dekko here: Also Read – Deepika Padukone demands a huge remuneration to work in Prabhas’ next with direcor Nag Ashwin? 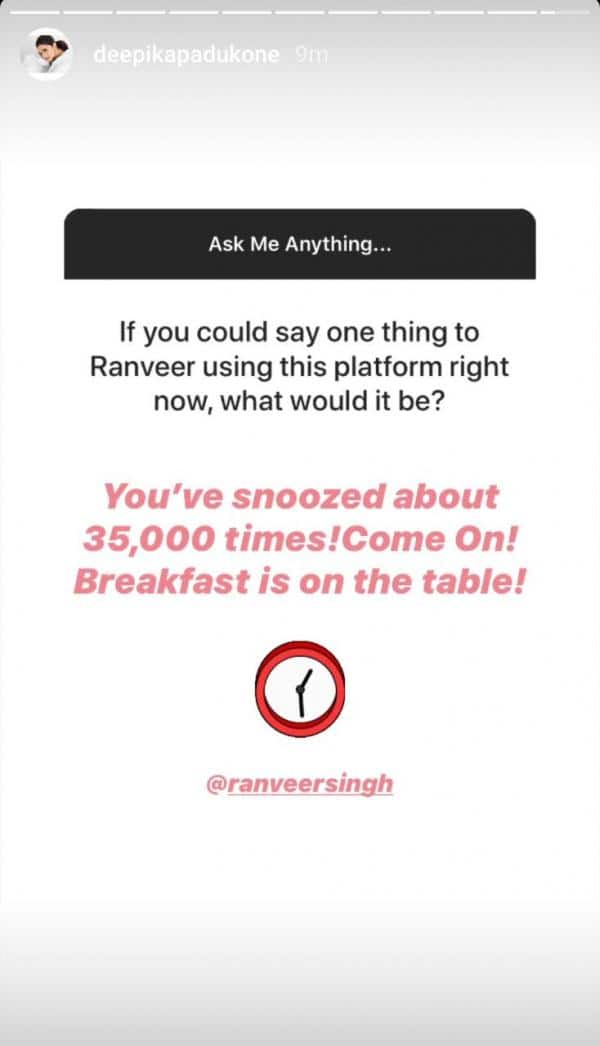 Also Read – Sooryavanshi, ’83, Bhuj: The Pride Of India: 12 Bollywood movies that promise blockbuster entertainment in the second half of 2020

Earlier in an interview with Filmfare, Deepika Padukone had opened up on films after the wedding. When asked whether the kind of films that she would do would change, the actress said, “No, why should it? The journey of life will. The kind of films that I do today and the films I did five years ago are different because I was in a creatively different space then. But marriage is not going to change anything.”

She also opened up on how marriage has changed her as a person. “I’m a lot more grounded. I feel secure, I feel protected. When you’re in a relationship, there’s still a lot of nerves, you’re still unsure, no matter how long you’ve been dating. I guess, the terms boyfriend and girlfriend sound frivolous. Somewhere, it doesn’t carry that weightage as marriage does. Today when we look at each other, there’s a sense of responsibility.”