Even as the nation, especially Mumbai, grapples with a surge in coronavirus cases, actress Sonam Kapoor decided ti was time to return to London. Bollywood news circles are buzzing with reports of how the actress was spotted at the airport along with husband Anand Ahuja, with both returning to London after having landed in Mumbai for the actress’ birthday before international travel restrictions were imposed. After landing in India, Sonam stayed with Anand’s parents in Delhi before shifting base to Mumbai to be with her family for her birthday. Also Read – Sonam Kapoor and Anand Ahuja don’t see each other much despite being in the same house!

However, now that traveling has relaxed a bit Sonam Kapoor and Anand Ahuja have decided to return to London. The actress had posted a few pics on her Instagram stories, with varied captions like “London I’m back” and “So beautiful”. Check one of the pics below: Also Read – Abhishek Bachchan OPENS up on his struggle to get directors and producers to launch him in Bollywood 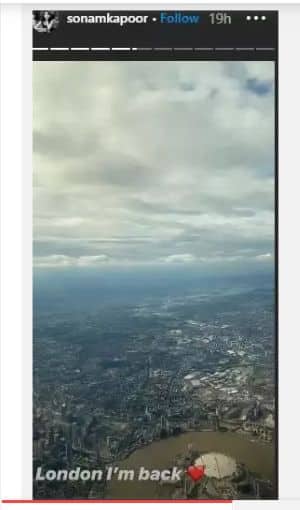 Opening up earlier in an interview to Film Companion about shifting to India for some time, Sonam said,“I decided to come back to India right before the travel ban was imposed just because my father (actor Anil Kapoor) is 63. He’d hate to say this but he is 63, my mother is 63 as well. We all stay with Anand’s grandmother who is also around 80 years old. There was no one actually in my husband’s house just in case something happened to be there and take care of everything. So Anand and I did the responsible thing to fly back even though we were so scared to fly.”

Applauding frontline workers for their efforts during lockdown, Sonam had previously written on Instagram: “I just want to say that it is incredible the way the authorities are handling the situation. It’s very commendable and laudable. We went to immigration; they again rechecked where we had been on our passports, which was extremely responsible. Then, Anand and I, had our gloves on and our masks on. Everybody also had their gloves and masks on.”

Well, we hope that Sonam and Anand stay safe.