In the latest Bollywood News, Shah Rukh Khan’s bungalow, Mannat, has been sealed in plastic and Twitter simply can’t digest it. Mannat, the palatial home where Shah Rukh Khan and his family live, has been covered with plastic sheets due to the ongoing monsoon season, and a picture of it has gone viral. “IS RAJ MAHAL KA NAM #Mannat HEIN, YE HUM SRKIANS KI JANNAT HEIN,” tweeted an SRK fan along with the viral photo of the actor’s bungalow covered in sheets. Also Read – Class of ’83 FIRST LOOK: Bobby Deol to play a Dean in Shah Rukh Khan’s next production 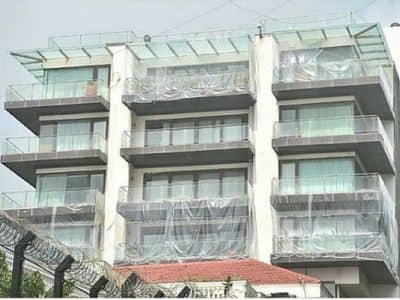 Some fans are also busy speculating why the actor has covered his house with plastic! “Today’s picture of Mannat! Fully covered with plastic what’s happening? Any guesses?,” tweeted another fan. Mannat is one of the most popular tourist destinations of Mumbai, where you can almost always see a bunch of diehard Shah Rukh Khan fans hanging around in front, clicking selfies at the bungalow’s gate and with the nameplate, and hoping to catch a glimpse of their favourite star. Also Read – Anjana Sukhani wishes to be quarantined with Shah Rukh Khan during lockdown — here’s why [Exclusive]

Shah Rukh Khan is presently living under quarantine at home along with his family amid the ongoing COVID- 19 pandemic. The actor recently took to Twitter to joke about his lack of work over the past one and a half years. Reacting to a throwback photograph shared by wife Gauri Khan that she had clicked with Shah Rukh and his wax statue at Paris’ wax museum Musée Grévin, the actor had tweeted: “Aur for the last 1 year and 6 months Dono ghar pe hain…!!! (And both of us have been at home for the last 1 year and 6 months.)”

The superstar was last seen in Director Aanand L. Rai’s “Zero”, which hit theatres in December 2018.

I feel blessed to have my family