Actress Tillotama Shome has received a strange marriage proposal on social media. Tillotama took to Instagram, where she shared a snapshot of a message she received. The message reads: “I love you. Will you marry me for my whole life forever? I am virgin and vegetarian guy who is always ready for a RNA 16s sequence male virginity test, lie detector test, narco test, brain mapping test.” Also Read – Chintu Ka Birthday helmers DISLIKE the way Quentin Tarantino projects evil in his films 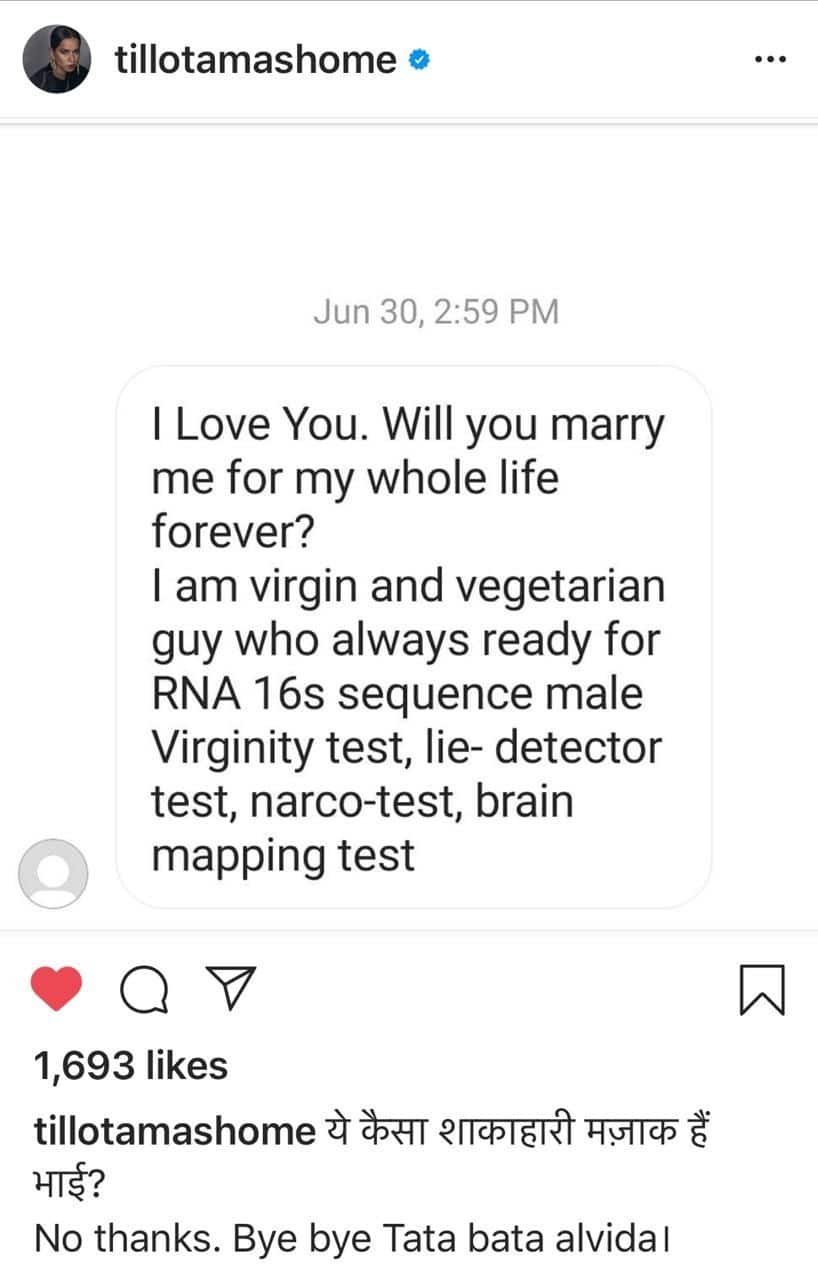 Also Read – A Death in the Gunj trailer: Konkona Sen Sharma’s directorial debut has all the ingredients of compelling twists – watch video!

“Yeh kaisa shakahari mazaak hai bhai (What sort of a vegetarian joke is this)? No thanks. Bye bye Tata bata alvid,” she wrote as caption alongwith the snapshot she shared. On the work front, Tillotama Shome is currently seen in the digitally-released film, “Chintu Ka Birthday”, which also features Vinay Pathak, Seema Pahwa, Reginald Barnes, Nate Scholz, Vedant Raj Chibber, Bisha Chaturvedi, Khalid Massou and Mir Mehroos. The story of the film revolves around a six-year-old named Chintu, whose expatriate family is stuck in Iraq at a time when Saddam Hussein’s regime has fallen. Also Read – A Death in the Gunj trailer: Konkona Sen Sharma’s directorial debut has all the ingredients of compelling twists – watch video!

Coming ot the last movie of Tillotama that BollywoodLife had reviewed, Qissa, our critic had given the film 4.5 out 5 stars and praised her performances effusively, writing: “Emphatically evocative are the sequences where Tillotama Shome as Kanwar is locked away in her father’s crumbling ancestral home in Pakistan with his’ bride Neeli. As they try to figure out a way from his gender imbroglio, a glowering state of doom and indignation gathers around the film. And though Tillotama Sharma’s gender challenged character never acquires the resilient tragic contours of Hillary Swank in Boys Don’t Cry, she brings a very high dose of credibility and poignancy to her character, specially in her high dramatic sequence where her character stands naked in front of her father’s ghost asking him her true identity.

Maidaan actor Ajay Devgn REFUTES the reports of him being in a brawl; blames it on a doppelganger