Not many films were able to see the light of day in theatres during the first six months of 2020 due to the coronavirus pandemic, which resulted in a complete lockdown, where theatres across the country still remain shut even after certain other enterprises have resumed. But, among the few that did release and others which made their way directly to OTT platforms, it’s our job to separate the best from the rest. So, according to our #BLBestOf6 poll, which we conduct after the first half of the year, Kangana Ranaut starrer Panga, directed by Ashwiny Iyer Tiwari, has steamrolled its competition to be declared as the Best Film in the first half of 2020. Also Read – #BLBestOf6: Kangana Ranaut BEATS Deepika Padukone, Taapsee Pannu, Radhika Madan by a thumping majority to emerge as the Best Actress for Panga

The other nominees included Ajay Devgn-Saif Ali Khan starrer Tanhaji: The Unsung Warrior directed by debutant Om Raut, Disha Patani-Aditya Roy Kapur-Anil Kapoor-Kunal Kemmu starrer Malang directed by Mohit Suri, Taapsee Pannu starrer Thappad directed by Anubhav Singa, Sanjay Mishra starrer Kaamyaab directed by Hardik Mehta and Amitabh Bachchan-Ayushmann Khurrana starrer Gulabo Sitabo directed by Shoojit Sircar. And among such popular titles, with two of them (Tanhaji and Malang) also being the only Bollywood to emerge successful at the box office, it’s Panga that has been chosen as the Best Film, and that, too, by a mind-boggling 70% of the votes. Also Read – #BLBestOf6: Tanhaji, Malang, Thappad — vote for the Best Film in the first half of 2020 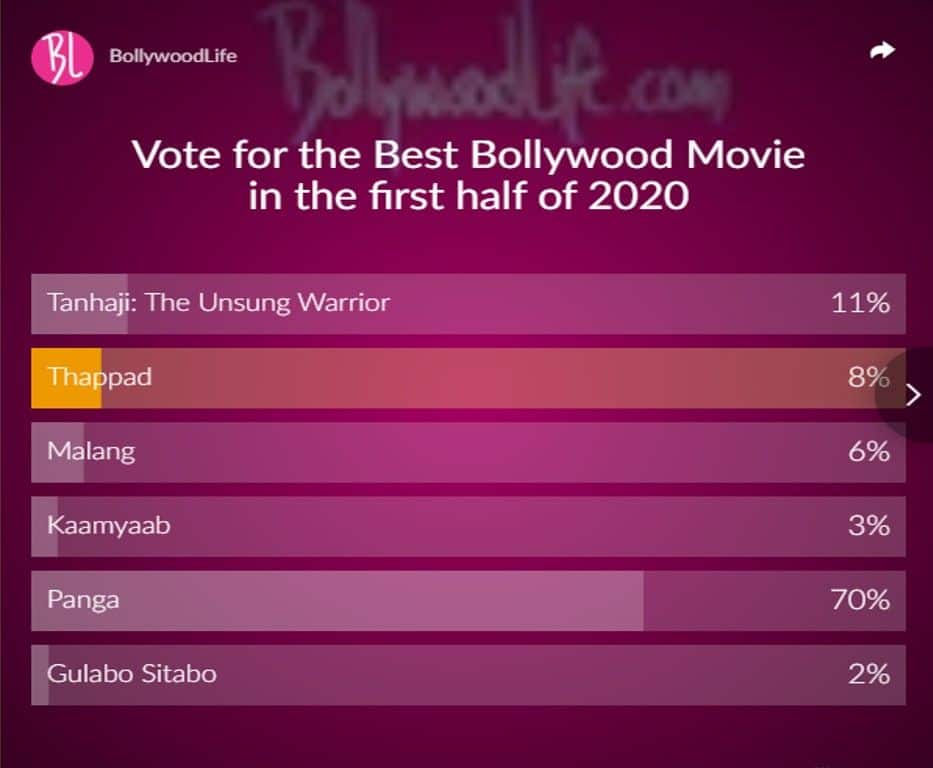 Also Read – #BLBestOf6: Bollywood witnesses the WORST first half in 2020 with just 2 clean hits at the box office

Tanhaji comes in at a very distant second with 11% of the votes, followed by Thappad (hitherto 2020’s most critically acclaimed film) and Malang at second and third with 8% and 6% votes. Kaamyaab and Gulabo Sitabo, with the latter choosing the OTT route, languish at the bottom with 3% and 2% of the votes. Panga didn’t work at the box office, but certainly seems to have struck a chord with the audience once it made its way to digital and satellite platforms.

So, are you contented with Panga being declared the Best Film in the first half of 2020? Did you vote for it or one of the other five nominees or would you have rather seen another movie on the list? Tweet and let us know @bollywood_life .