We had recently conducted a poll where we had asked you to vote for the Best Actor in a Web Series. The poll was a part of our #BLBestOf6 event, which we conduct during the first half of the year. For 2020, the nominees for male actors in a web series included Manoj Bajpayee in Bhonsle, Arshad Warsi in Asur, Jaideep Ahlawat in Paatal Lok, Ronit Roy in Kehne Ko Humsafar Hain 3, Vir Das in Hasmukh and Zain Imam in Never Kiss Your Best Friend 2. Also Read – #BLBestOf6: Paatal Lok’s Jaideep Ahlawat, Bhonsle’s Manoj Bajpayee, Asur’s Arshad Warsi — vote for the Best Actor in a Web Series/Web Movie in the first half of 2020

Well, the results are its Paatal Lok’s Jaideep Ahlawat who has won the race albeit by a whisker. He has got 40% of the votes, just 2% more than his closest competitor, Ronit Roy, who was nominated for Kehne Ko Humsafar Hain season 3. The other nominees though are far removed from both of them as Vir Das comes in third with just 8% of the votes for Hasmukh, followed by Manoj Bajpayee and Arshad Warsi with 6% votes each for Bhonsle and Asur. Zain Iman, nominated for Never Kiss Your Best Friend season 2, languishes right at the bottom with merely 2% of the votes. Also Read – 23 Bollywood actors who took a leap beyond the silver screen and ventured into the digital space 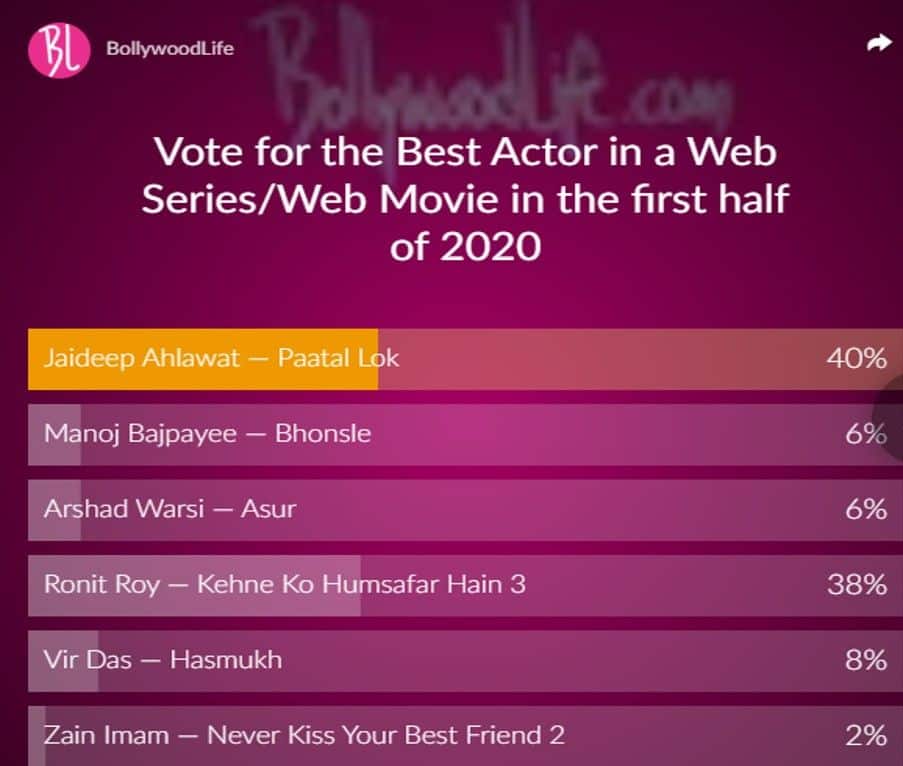 So, this was basically a 2-horse race between Jaideep Ahlawat and Ronit Roy for Paatal Lok ans Kehne Ko Humsafar Hain 3. This also shows how popular both the web series are as despite all the actors nominated having performed brilliantly (otherwise, why would they have been nominated in the first place), the two shows to have grabbed a massive amount of eyeball this year, ended up having a say, advertently or inadvertently, in their lead actors being clear frontrunners before the other four nominees. Taking nothing away from the other web shows, Paatal Lok is by far one of the most widely watched, talked about and well received Indian OTT series of all time while Kehne Ko Humsafar Hain has a loyal fan-base since years.

So, are you contented with Jaideep Ahlawat being declared the Best Web Series Actor in the first half of 2020? Did you vote for him or one of the othe five nominees or would have rather seen someone else in the list? Tweet and let us know @bollywood_life .

Did you know THIS Bollywood actor and not Sathyaraj was the first choice for Kattappa in Baahubali?