With the first six months of 2020 officially done and dusted, leaving us worn out from a truly terrible year, the better part of which has been spent cooped up at home, web series have been our main recourse and as such, it’s only fitting that we look at the best ones, especially among Indian OTT shows, that have provided some great entertainment news in the first six months of 2020 among all the bleak and dreary things that have transpired around us. Today, we’ll be focusing on the best web series during this period. As a part of our special #BLBestOf6 event, we recently conducted a poll to determine the Best Web Series for Indian OTT content in the first half of 2020. The nominees included Aarya, Asur, Special Ops, Jamtara, Paatal Lok and Panchayat. Also Read – #BLBestOf6: Special Ops, Paatal Lok, Aarya, Narcos Mexico — vote for the Best Web Series Trailer in the first half of 2020

Well, your votes are in, and it’s Arshad Warsi-Barun Sobti-Ridhi Dogra-Sharib Hashmi-Amey Wagh starrer Asur that has won the race by a humongous margin, with 62% of the votes, a whopping 45% more than the next best and just as well appreciated Special Ops, starring Karan Tacker, Vinay Pathak, Kay Kay Menon, Sana Khan, and directed by Neeraj Pandey. The other nominees are not even in the frame, all securing votes in mere single digits. Jaideep Ahlawat, Abhishek Banerjee, Neeraj Kabi and Gul Panag’s Paatal Lok, which marked Anushka Sharma‘s debut in digital production, came in third with just 9% of the votes, followed by Sushmita Sen’s big comeback, Aarya, bagging 7% of the votes and Neena Gupta, Raghuvir Yadav and Jitendra Kumar’s family comedy, Panchayat, securing merely 5% votes. The last nominee, Netflix’s Jamtara isn’t even in the frame with not a single vote coming its way. Also Read – #BLBestOf6: Aarya, Asur, Special Ops — vote for the Best Web Series of 2020 so far 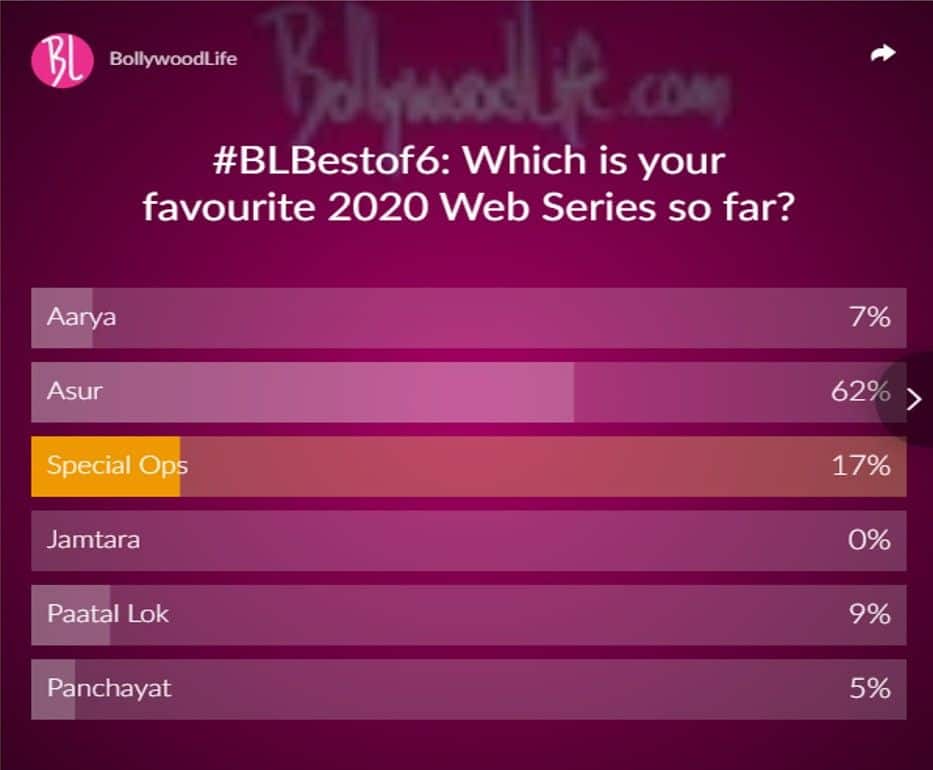 Also Read – Saiyami Kher REVEALS Special Ops 2 is going ahead; says, ‘I hope so’ that my role is bigger [Exclusive]

Asur was a dark horse, which arrived with hardly any buzz or even awareness, and slowly grew into one of the best Indian shows ever made, be it for OTT or TV, and its culmination in such a thumping win shows just how dark horses can turn the competition into a 1-horse race. So, are you contented with Asur being declared the Best Web Series in the first half of 2020? Did you vote for it or one of the other five nominees or would you have rather seen another entry on the list? Tweet and let us know @bollywood_life .

Salman Khan turns farmer at Panvel farmhouse, takes a moment to rest on ground, all soaked in mud