Anushka Sharma is a beauty queen. The actress has been keeping busy as a producer and acting has taken a back seat for a while now. However, that’s not stopping Anushka from creating a stir on social media. The actress recently conducted a photo shoot for the season’s collection of a popular brand. For the same, Anushka slipped into several resort-wear that are just too HAWT to handle. Anushka Sharma shared a magazine cover of Vogue India on her Instagram handle. She could be seen in a cobalt-blue halter neck Hermès swimsuit. It was detailed with tassels on the neckline. A signature print, beach shirt by the French brand was added to complete her scintillating look. Have a look at Anushka’s post here: Also Read – International Kissing Day 2020: From Ranveer Singh-Deepika Padukone to Abhishek Bachchan-Aishwarya Rai, these B-Town couples believe in ‘kiss and tell’

However, do you know what this look costs? We were browsing and found out. The swimwear itself costs about Rs. 39,300 and the shirt costs about Rs. 1,17,000, which totals Rs. 1,56,300. Yes, that’s how much this look of Anushka is worth. It is the basic annual salary of a fresher. Also Read – It’s Expensive! Anushka Sharma’s tote bag is for ones with deep pockets 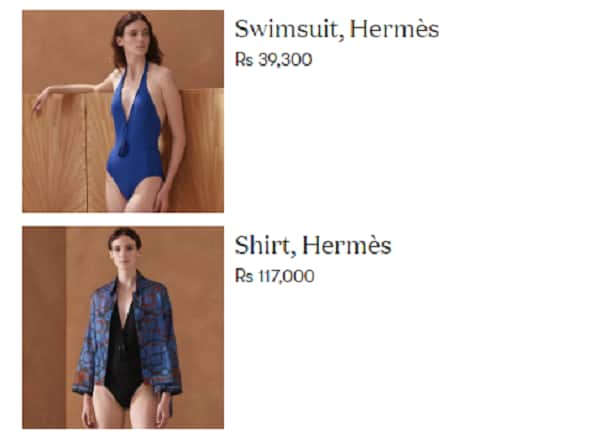 Also Read – Anushka Sharma opens up on visiting Virat Kohli on his cricket tours, ‘It’s to squeeze in that one meal together; it’s precious time for us’

Recently, Anushka opened up on spending more time with Virat Kohli now than she ever did. “People assume when I’m visiting Virat or when he is visiting me that it’s a holiday, but it’s really not. One person is always working,” Anushka told Vogue recalling her earlier days. “In fact, during the first six months of our marriage, we spent 21 days together. Yes, I actually calculated. So when I visit him overseas, it’s to squeeze in that one meal together. It’s precious time for us,” the Rab Ne Bana Di Jodi actress added.

Anushka also opened up on the pandemic situation, saying, “Whatever little inconveniences I have had to face in these few months is insignificant compared to what so many others in our country are facing—people are unable to go home, some are struggling with loss of income and home, others are facing starvation even as many more deal with their loved ones being unfortunately struck by this disease. I’ve always been realistic, but now more than ever I am understanding the meaning of life.”