While many film releases got postponed due to the COVID-19 pandemic leading theatres to shut down, Bollywood has managed to give us some memorable performances through in the first half of 2020. To know which actor impressed you the most, we conducted a poll and by looking at the results it seems there was a tough competition between Amitabh Bachchan, Irrfan Khan and Ajay Devgn. However, the ‘Superstar of the Millennium’ Amitabh Bachchan emerged as the winner of the poll with 32 per cent of votes for his portrayal of Chunnan ‘Mirza’ Nawab in Shoojit Sircar’s Gulabo Sitabo. The film was slated for a theatrical release, but the makers took the digital route and released it on an OTT platform. Big B won our heart with his subtle yet impeccable performance, where he completely sunk his teeth into the skin of the character, with his quirky camaraderie with Ayushmann Khurrana being one of the major highlights of the film. Also Read – Recovering from COVID-19, Amitabh Bachchan advises people to stay away from jealous trendsetters — view post 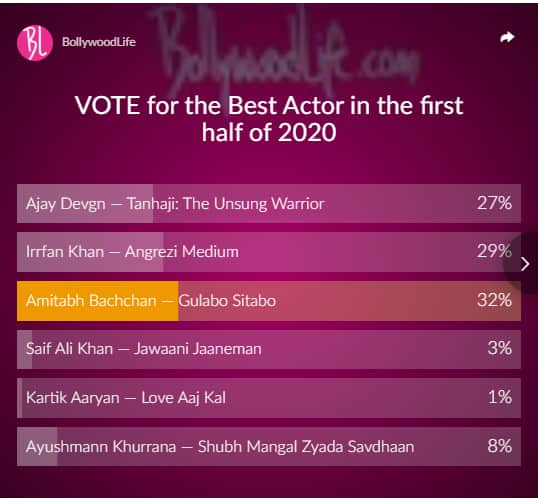 In fact, our critic Russel D’Silva wrote that Big B’s performance plays a major role in Gulabo Sitabo a watchable affair. He praised Amitabh Bachchan’s act and wrote, “Amitabh Bachchan is the glue that binds Gulabo Sitabo together. Remove him and it’ll disintegrate. From his diction, gait and posture to his ability to extract humour without seeming so and doing it while maintaining an excruciatingly difficult body language throughout the movie, not to mention under heavy prosthetics, will leave you awestruck as to how the thespian still finds new ways of leaving us awestruck after doing so for more than half a century.” Also Read – After four months in lockdown, Mouni Roy flies from UAE to London for a work trip, and we wonder what it could be

Irrfan Khan and Ajay Devgn were marginally close to Big B as they got 29 per cent and 27 per cent votes respectively for their acts in Angrezi Medium and Tanhaji: The Unsung Warrior. Ayushmann Khurrana, Saif Ali Khan and Kartik Aaryan didn’t get as much love for their acts in Shubh Mangal Zyada Saavdhan, Jawaani Jaaneman and Love Aaj Kal since they received only 8, 3 and 1 per cent votes.

Bollywood News – RIP Saroj Khan: ‘Have you never had sex?’ Saif Ali Khan recalls how the choreographer could shame actors into dancing better