The first half of 2020 has passed and we have missed so much and also suffered so much. However, there were a few good times as well. For example, the films that released in the first few months of 2020 when theatres were still operational. Mind you, we are not talking about films released on OTT platforms but in theatres before the pandemic had shut everything down. Since we have successfully entered the second half of 2020, we had recently conducted polls, with one of them on the Best South Actor in which we had nominees like Allu Arjun for Ala Vaikunthapurramuloo, Mahesh Babu for Sarileru Neekevvaru, Udhayanidhi Stalin for Psycho, Tovino Thomas for Forensic, Sharwanand for Jaanu and Mammootty for Shylock. And today, we will be declaring the results. Also Read – Vijay Sethupathi confirms backing out of Allu Arjun-Rashmika Mandanna’s Pushpa

It is none other than Stylish Star Allu Arjun who had grabbed the top spot as the Best South Actor in the first half of 2020. Allu Arjun was seen in Ala Vikunthapurramuloo, which has become one of the most loved Telugu films of all time, not only in the first half of 2020. The film saw, Arjun playing the role of Bantu, a guy who spends his life as a middle-class man. The actor’s scintillating dance moves in Ramulo Ramula and Butta Bomma and his chemistry with Pooja Hegde was vastly appreciated. Allu Arjun secured 31 percent of the votes, beating Mahesh Babu who came in a close second with 29 percent of the votes. Also Read – #BLBestOf6: Allu Arjun-Pooja Hegde in Ala Vaikunthapurramuloo, Sharwanand-Samantha Akkineni in Jaanu – Vote for your fave South Jodi till mid – 2020

Sharwanand, who was nominated for Jaanu, earned 21 per cent votes while Udhayanidhi Stalin got 13 per cent votes for his portrayal of a visually challenged man in Mysskin’s Psycho. Mammootty’s Shylock was not one of the best films of the superstar, but his performance was nonetheless appreciated. However, he just secured merely 5 per cent of the votes in the poll. Lastly, we have Tovino Thomas whose Foresic was much appreciated. However, he secured just 1 per cent of the votes amongst the nominees. Have a look at the result here: Also Read – #BLBestOf6: Ala Vaikunthapurramuloo, Sarileru Neekevvaru, Bheeshma: Vote for the best South film trailer of 2020 so far 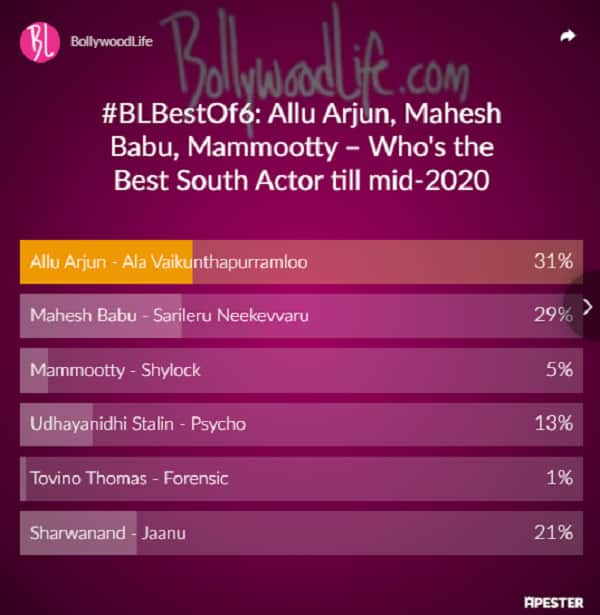